Aldbrough, East Riding of Yorkshire. Population: 1,269. Situated about 30 minutes drive from deepest darkest Hull, and most famous perhaps for a brand of rapeseed oil made in the area and for being situated in a coastal erosion hotspot. My wife says you can throw a stone from one end of the village to the other, and if you’ve got a good throw, it’s not wholly unimaginable. And the whole place is covered in fields, corn and more fields. Hence finding suitable routes to run amongst the small number of ‘B’ roads was always going to be a challenge and so it’s just as well I made preparations.

My first run wasn’t the most stimulating. Sure, I went off like a shot due to the village’s low-lying nature, and in the end my mile times paid for that, but I found myself aimlessly killing time at the end of the session – deliberately loitering near my start point so as not to finish too far from where I was staying. The best thing to take from this session was no new injuries or aggravation of previously existing ones. But things looked up from there. My interval session for the week arrived on Thursday morning, with a course plotted from Aldbrough to the nearby village of Mappleton, descending on the beach before doubling back. The rain came down hard at first and was a little horrid, although it did turn out to be a successful first test for my luminous all weather jacket. I didn’t touch any unexploded ordnance – which Mappleton is famous for – while on the beach, and was impressed with my mile times during the fast sections of my run. The second mile was recorded in 6:59, and the seventh in 6:50. The first time I’ve ever recorded two sub-seven minute miles in a run, and the latter of those more remarkable for it becoming like a steeplechase as I had to make way for traffic from both sides. This part of the country is full of long winding roads with little or no causeway, and no causeway means long grass, which itself hides numerous ditches which I was lucky I didn’t fall victim to, despite hitting a number of them.

Owing then to a lack of space in my grandfather-in-law’s car, he dropped me off in Mappleton at the top of Cliff Road, where for the first time I completed a beach run, a 2.8 mile jog from Mappleton to Hornsea. By now the weather had improved massively and it was a beautiful sight. I did get my feet wet once or twice but worth it for the experience. Blackpool Beach 10K, I’m heading your way! 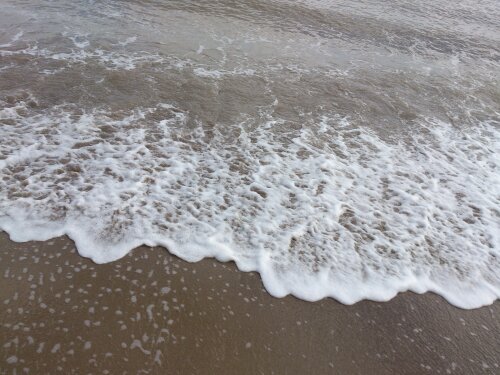 Saturday was my usual leisurely stroll proceeding the long Sunday run, so this time I did another jog up to Aldbrough’s coastline, where I took a closer look at the erosion in the area. The photos here show the fault lines in the road. Apparently this is the point locals descend onto the beach. Risky business. It seems stable enough for now but you can tell from the outline of the coastline the toll Mother Nature is taking out on coastal towns. Indeed, one humorously named house further down the road is named ‘Clifftop Cottage To Be’, although it’s a fair while before it achieves true clifftop status.

Yet it was Sunday that would prove to be not just a fitting finale to my six days here, but a glorious one at that. At first, the 8.5 mile course starting from Carlton Lane, heading to the edge of Burton Constable, before circling back onto the B1238 through Flinton and eventually back into Aldbrough seemed a little too long. Especially considering this session was only meant to be 60 minutes long. With a previous fastest pace over this distance averaging 7:36 per mile, I was going to have to break all kinds of records and go all kinds of never-before-sustained speed.

And yet, I did it. I ACTUALLY DID IT! The lack of large hills allowed for a speedy assault on this route, and halfway through I was past the 4-mile mark. At 51:30 I was at 7.3 miles. I was putting everything on the line, like I was heading to win the medal. I passed the sign for Aldbrough with just under two minutes to spare. At exactly an hour, I finished, having clocked 8.57 miles. An average pace on 6:59 per mile, a new 5K PB of 21:58, and my PB mile broken twice on the 7th and 8th miles – from 6:47 it dropped to 6:45, and suddenly to 6:42. I actually leapt and punched the air with delight. I didn’t see the lady with her dog around the corner. Goodness knows what they were thinking?!

And thus that brings to an end another holiday packed with running.