It had been four long, weary days since the weekend of hilly running. I finally got on the foam roller that Thursday night, and worked that thing on my quads. The knot I found in my left quad was mega, and the pressure I eventually applied using my right leg was near excruciating! The next morning though, I seemed free of aches and my Saturday and Sunday runs both went really smoothly, unhindered by achy muscles and everything feeling free moving. I absolutely needed that bout of self flaggelation. Why I hadn’t done it sooner I’ll never know.

All in all my easier week went by without much incident, that smoothly it went. The biggest thing to report from that week is I was called up for my club’s team for the North of England 12 and 6 Stage Road Relay Championships in Birkenhead Park on Sunday March 24th. As I understand it, it’s an event with both 5km and 5 mile legs. I’ve been asked to run 5 miles. I falls on another ‘easy week’ and so with just a little rescheduling of my training, it’ll make for a nice distraction from my ongoing preparations and to have a bash at getting a fast time over a lesser raced distance. It’ll be a cracking event nonetheless, and I’ll get to run against some really strong competition.

I started the next week (WB: 11 March, 2019) with a hill reps session with my club, which Storm Gareth threatened to make somewhat interesting, but thankfully held up as a few of our club ran up and down the 15% gradient of Southowram Bank. Save for the odd gust of wind, which would get worse overnight and into the next couple of days, we got away fairly lightly with the weather. When I got home, I soon got to changing my bedsheets, and in the process, found my Garmin, which had somehow fallen down the back of the bed. It was still fully intact and in working order, and back in time for my next tempo run as well.

Now I’m not saying I rely on my watch, but when it comes to trying to record your interval pace accurately and informatively, I find it more helpful to see what my current pace is than guessing with the aid of a phone app – which appears less accurate than a watch – as such lately I’ve been conducting tempo and intervals effecting blind to my current pace. Don’t get me wrong – I can, and have, been hitting my target pace. But though my goal is sub-3, my training pace is more like 2:55. Blind, I can fine tune my pace after a few miles so that I’m closer to 6:40. But with the watch, after a little warm up, I can be straight in. Needless to say, I’m happier for having the watch to hand again – but I at least have a greater understanding of my blind pace when it matters, or if the watch packs up on race day, as it a couple of times the previous year.

The weekend was a packed schedule of 10 miles marathon pace on the Saturday, 20 miles on the Sunday. I slept in on the Saturday, and were it not for an errand I carried out for my wife, which I converted into an excuse for a 3 mile round run trip in the rain, I’d have lost my day completely to family time. Frustrated as I was, I had to write it off, and looked forward to the 20 miler.

I went to bed about 9:45pm that night, aiming to get up at 3:10am. This was purely to a) sufficiently prepare for the long run, and b) ensure I could complete the run in enough time to ensure the kids allowed my wife a lie in. I’ve no other reason for wanting to get up at such an uncomfortably early hour. But this is the length I will go to in order to maintain the fine balance between my own pursuits and family/work.

5+ hours sleep obviously isn’t enough sleep, but in the end I managed it, loading Spotify after snoozing my alarm and playing the first song to load, which happened to be ‘People=Shit’ by Slipknot. Lovely. It worked, I was up and preparing for my run, and not feeling too tired. I cooked plain porridge on the hob and chucked in some peanut butter and half a teaspoon of chia seeds. Then it was onto the nutrition, which this time I’ve been playing closer attention to.

Having used Maurten on an 18 mile run with positive result, I used their drink mix, Maurten 320, for this run. There’s plenty more blurb on their website about how it works but basically, it’s a hydrogel that converts to energy as your body digests it. In essence, it’s to allow you to take on more carbohydrate. My belt was loaded with everything I believed I would need for the run – Maurten gels, Saltstick capsules, a mini Chia Charge, a mini Soreen bar, and a High5 Isogel + Caffeine. (Disclaimer: I’m not being endorsed!)

On with the run I went, an out and back from Brighouse to Ossett, a town near Wakefield. Essentially a long series of ‘A’ road, its not the most scenic route but it did mean I could focus fully on the run without too many distractions. Although I had to stop numerous times on the way out as I had trouble faffing about with reaching my gels, etc. from my race belt. Which, given I intend to use it in the race, is fairly critical. I knew I needed to familiarise myself with where the holes on the belt were so I could reach in and not drop too much pace. I would later get the hang of it.

After a steady first 10 miles, I looped around Ossett town centre to head back via the village of Chickenley. This meant I took a road which contained one large 12% drop and a seemingly steeper climb back out. Nonetheless I rejoined Wakefield Road into Dewsbury in good shape, and decided once leaving the town centre I would start going for my target marathon pace. Basically between 6:40-6:52 per mile, but in reality closer to 6:40-6:45 per mile.

I cracked it on mile 14. Then mile 15 I faffed about eating the Soreen and ran 7:05. So I picked up the pace again, and with each mile moved back into my target pace range. I was starting to get odd twinges in my ITB band – a minor issue before the run – and my left hamstring was starting to nag. I simply focused and told myself to push on, to drive forward. I ran 6:45 for mile 16, and then the next three miles at around 6:41-6:42 pace. I shut it down then in the final mile, but come the end of the run, I was thrilled. Slightly knackered, but very happy.

Maybe I’d gotten too critical of myself over the last few months. I knew I was working back through the disruption I faced prior to the Liversedge Half Marathon, and it felt for some time that I wasn’t exactly in shape for the sub-3 attempt. But something has now changed. Yes, it coincides with finding my watch, but my last three runs, even the one to collect a bloody parcel, I looked for my target pace and I was able to lock it in. A lot before now felt hit and miss, but it genuinely felt like that 20 mile run was the significant run of my training for Blackpool. I ran comfortably for the most part. I was able to lock into target pace almost at will, able to run it when tiring, resisting the urges from my limbs to stop.

In the end, I was almost on Cloud 9, that the run had gone so well. It wouldn’t have been the end of the world if it hadn’t, and it certainly wasn’t all smooth going, but I brought it together when it mattered, six weeks out from race day. The nutrition was pretty much perfect. I’ll only truly know on race day, but the Maurten drink mix and gels really seemed to keep me fuelled, tasted clean, gave me no gut issues whatsoever. The solid foods I ate seemed right, and it seemed that maybe, just maybe, the Saltstick chewables were going to help with the cramps I may suffer in the latter end of the marathon. I never used the High5 gel. I’ve had them before but it got to mile 17 when I was due to take another gel, according to my strategy. I saw no point on this occasion, in wasting a gel I already know roughly whether it does me any good on the last three miles of my training run. It may be different come race day, but after years of searching for the right nutritional balance, I may just have found it.

So there we are. 6 weeks to go until the race. Finally arriving into what seems to be some settled form. My next week will be another easier week, culminating in racing for my club at the team event in Birkenhead. While I’m rejigging my training to accommodate the event, it should actually compliment my ongoing training really well. I’ve got one more 20 mile run after that, and then the taper.

I’m beginning to smell the familiar smell of the Promenade. It’s not so far away now! 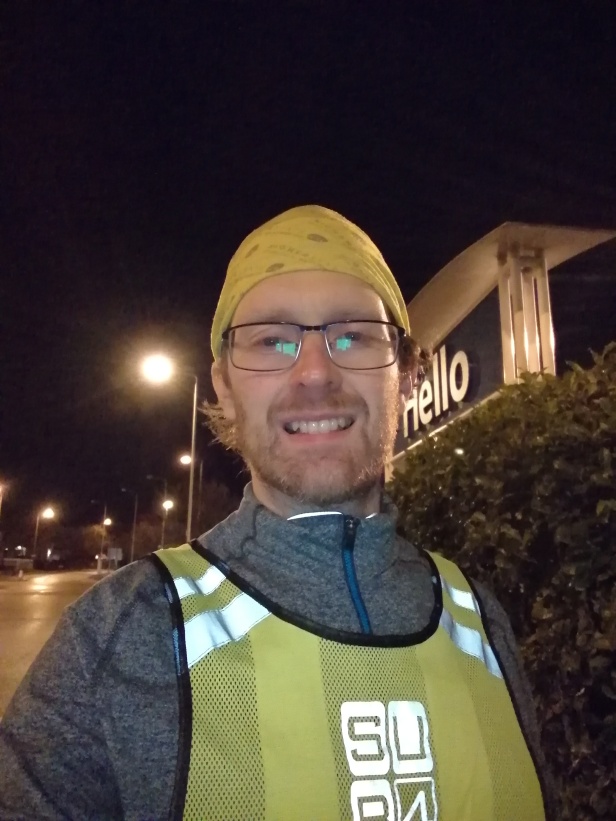