It was almost a given that I was going to enter the Liversedge Half Marathon again this year. No matter when I decide to run my spring marathon, it’s the first race I can think of as my tune-up, given its ideal position in the calendar and an elevation profile to challenge and to strengthen on. I ran it in 2014, 2015, missed 2016 due to injury and 2017 due to ultra marathon training instead. I returned last year to smash my PB and for a while I had wondered if I could get any closer to the sub 1:20 that seemed it might be in my reach.

The build-up to my race, as documented in my last post, had been disrupted by family illness and latterly, injury. My left knee had become a source of bother and there was one point on the Tuesday before the race that I’d considered withdrawing and seeking to transfer my place. Thankfully, I seemed to improve towards the end of the week, and managed a 4.5 mile run home two days before the race. I came through without any problems at all, and so I declared myself fit for Liversedge. I knew though, that getting another PB now was going to be a tough ask.

Now in its 23rd year, the Liversedge Half Marathon has become one of the best events in the running calendar, certainly in this part of the world. Organised by the Roberttown Road Runners, the race is now an established fixture, and despite its reputation as a challenging race, in terms of its undulating weather and typically wild weather, it draws the support of the local community, and entries fill the event every year.

Last year, the weather was fairly kind, a bit of a change for Liversedge, but it made for ideal running conditions. This year, the weather was slightly warmer, thanks to the high pressure from the south currently pasting our shores. Although having said that, the wind was starting to pick up a bit and would surely be felt a bit later, up on some of the hills.

I more or less decided that I would still go with my hell-for-leather approach, only holding back if I felt any reason to properly doubt my knee or indeed, if the worst should happen and record a DNF.

Such the approach seemed to pay dividends in so much that, as with last year, I got off to a quick start, trying to get an early boost from the faster runners who were almost certainly going to leave me behind before too long. I did find myself getting overtaken by other runners, including two places lost after awkwardly negotiating the first water station. Still, I tore down the 14% descent of Birkby Lane and reached Bradford Road in around 32 minutes, as per the big clock/temperature display outside one of the shops on that road. This meant once again that whatever my 10K split was for this section of the course, it must have been bloody quick, as the 6 mile marker wasn’t much further ahead. And this was despite briefly stopping to adjust my knee support, which managed to slip twice, not convenient when it’s supposed to be doing a job! Thankfully though, I didn’t seem to be having any trouble, just the odd twinge which, after this point, went away altogether. 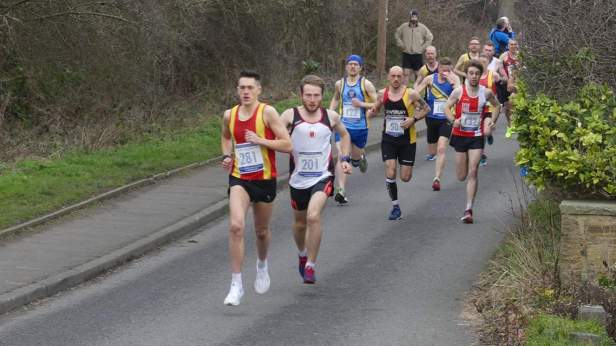 The next mile or two were a bit laggy, to be perfectly honest, but I wasn’t in the least bit surprised. I kept a good pace going up Thornhill Bank Lane but the last section before the right turn is a killer, steadily rising again until a right turn up a very short, very steep section that just about, at this juncture, actually made me want to stop. Which I did. For about a second and a deep breath. On I went again. I lost another place soon after, and so took on another gel just before the next water station.

Heading into mile 9, up Highmoor Lane, aka ‘the Mad Mile’, I found myself overtaken by the leading lady who was on a charge. Interestingly though, the last guy to overtake me wasn’t getting away, and as we approached the top, I found a second wind, just as last year. So I began timing how far back I was from him. At the turn onto Halifax Road, it was fifteen seconds. By the time we were into mile 10, it was three seconds. I was reeling him in, and shortly after the next right/left turn, I went past him, without a passing glance, and applied the squeeze.

I reached the church clock shortly after starting mile 11, and the time was 12:08pm. That seemed to be down slightly on where I was last year. I kept pushing but my effort seemed to be catching up again with just over a mile to the finish. I kept glancing over my shoulder for traffic, until one marshal told me there was no one behind me and offering encouragement. Wow, I thought, I’ve actually dropped the guy I overtook two miles back. That was some positive energy to take forward, but there wasn’t a final sprint in my legs. I just carried on and carried on until the final left turn uphill towards the finish. The clock confirmed it wasn’t a PB performance, but at least I had the finish line all to myself for a few seconds.

I finished 13th overall, in a time of 1:24:44. Not my quickest time, but two weeks ago, if you’d have offered me that time before starting, I’d have taken it. Having done minimal running in those two weeks, and running into a blustery headwind at times, it was still a pretty decent time and indeed, where I had forecast I might be at before the race. And it seemed my left knee held up completely fine. The compression sleeve more or less did its job in that regard, even if I did have to adjust it mid-race. Twice!

If I hadn’t said so already, the event gets better each and every year. The goody bag returned this year (as seen in the header image), containing a bottle of water, a bag of crisps, some energy tablets, an arm sleeve to carry your phone in on the run, and a water bottle with a handle. Hot and cold food & drinks are available in the community center (the race HQ), all affordably priced. The standout for me though is the sheer level of support this event gets. There’s a marshal on every corner. I know races should have, or at least have appropriate signage, but this is a race that takes place in a mostly quiet corner of West Yorkshire. I guess its the sheer numbers of volunteers, whether marshaling, manning the water stations, food in the canteen or medical assistance, everyone plays a part in making this event an absolute success. And a mention must go out to WoodentopsFR for their brilliant photography, which they’ve posted online for nothing. Gratis.

Liversedge may not be able to match the glitz that many, often more expensive half marathons around the country offer, but having now run the race four times, and seen how it continues to improve and keeping a focus on its ethos as a friendly, and testing road race, without question the Liversedge Half Marathon is one of the best races to have on my proverbial doorstep, and indeed the wider region. 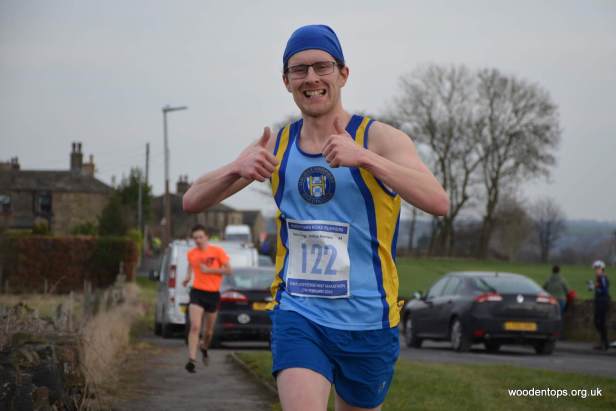 Thank you to Philip Bland/Yorkshire Runner Photos/Woodentops FR for the race images.