Following my last post celebrating my invitation to Allianz Sports 2018 in Munich, Germany, things took a bit of a downward turn. Earlier that week I’d been forced to put running on the shelf as a source of curiousness in my right foot became a source of discomfort. Yes, the dreaded (likely) plantar fasciitis. The classic runner overuse injury. By my own admission, its been ruminating for about a year now, but through TLC and careful management, I’ve kept it well at bay. But the tables were truly turned after going out on a brisk lunchtime walk, a little over 24 hours after a 10 mile trail run the previous weekend. I was sat at my desk working, as usual, and got up to go to the men’s room when I felt an unusual and indeed, uncomfortable sensation suddenly emerged from the arch of my right foot, and I knew exactly what it was.

With running a no go in the immediacy, I decided to head to the pool to go swimming. The relevancy of this as a fallback option couldn’t have been better timed given that, since mid December, I hadn’t even been to the local pool once, through a combination of several factors. These being family and work commitments, marathon training, bad experiences with public transport (all of which contributed to missing swimming lessons). But all these events sapped my motivation to swim. I ended up using many of these events as excuses not to swim. Though I felt bad at letting my hard work of 2.5 years of lessons slip away, I really couldn’t find the drive to do anything about it. Until of course, a running related injury struck. So off to the pool I went. By and large, it went well. Although my stamina was way down, my technique was still OK, albeit a bit rusty, and I successfully managed about 400 metres, if that. Not that I was keeping track. But I left the pool that night feeling like I’d got a bit of motivation for swimming back. Though I’m not ready to resume lessons until I can get back to swimming at least 100 metres non stop.

Any notion I might have had about either doing more swimming or even running that week was firmly sidelined when I acquired a rather nasty cold. It didn’t stop me stretching or doing any other form of rehabilitative exercise, but I really didn’t feel up to any form of sporty exercise, whether on two feet or face down in the pool.

The week after, feeling reasonably better and having gone through foam rolling my calf along with other stretches and massages, my foot seemed in better shape and so I set about returning to training. Tuesday was club night and this time it was mile reps on the canal. There were just four of us doing it, but we absolutely flew. The first two miles I recorded went for about 5:31 and then 5:29.8 – one of my fastest miles of the year, although my Yorkshire Road Relays performance averaged 5:23 per mile (I recorded in metrics). My latter two miles were 5:53 and 5:41, a bit sluggish in comparison but still pretty good going. I certainly could feel the effects of having a week off, but crucially my foot felt fine. All in all, a fantastic session from the four of us

My employers were having their data recovery test days at a site closer to my home address than my regular place of work – I’m not permitted to disclose precisely where – but nonetheless, I used the opportunity to get some more running into my week. I did five miles on the Wednesday, running part of my route along the Calder Hebble Navigation, but utilising the woodland nature reserve paths for most of the stretch. I then carried out a longer run on the Thursday, opting to head out through Greetland, and along the trails to Copley, joining the canal there.

After a punishing uphill through Greetland, I arrived to the next trail and followed it to its end, with the option to go right down a rocky path, or through a grassy trail which would actually take me further out than I wanted. I decided to stick to plan and turn right, but seemingly without warning I kicked a massive raised paving slab and was sent flying forward, stumbling forward, initially unable to stop until I managed to firmly plant my foot. Pain was shooting through the big toe on my right foot. I sat down on the path, took my sock and shoe off and inspected the damage. It was quite tender around the nail and I sensed there might have been some damage around the knuckle of the toe as well. I was nowhere near a bus route, so I opted to carry on in discomfort, gritting my teeth until I arrived in Copley village. I stopped by the entrance to the canal and looked to see if I had any buses I could catch home – however with none present, I decided to carry on. Gradually the pain went away, masked by adrenaline, and I ended up running the entire remainder back into Brighouse.

Once the adrenaline wore off, I was in a fair bit of discomfort at home. Although I could walk fine, it was carefully so and the toe still felt tender. I iced it for 20 minutes with a gel pack and took ibuprofen, and about an hour later I iced it again. I ended up sleeping quite early which prevented me from trying to treat it any further, however I woke up the following morning and seemed to walk fine on it, and with hardly any discomfort at all. It seemed I had dodged a bullet there – the nail felt a bit sensitive but nothing more and within a few days I can say its probably about 90% healed.

With faith in my body, or indeed my toe, restored, I booked into the Ilkley Trail Race (which actually happens today), a 6.9 mile run around the trails, woodland and moorland of Ilkley (but not Ilkley Moor itself). I needed something to do on the Bank Holiday, with my wife and kids going away, so this fit the bill tremendously. I decided to rest up on the Friday and Saturday and cancelled my race pace 10K yesterday, instead opting to run the distance steady along the Calder Hebble Navigation and Cromwell Bottom Nature Reserve once again, largely ignoring the watch and simply reconnecting with what nature gave us. And I loved it! It’s nice to run without paying attention to a watch or worrying about times. I’ve been round the Cromwell trails many times before, but rarely do I stop to run closer to the Calder. It was such a beautiful day for it, I felt absolutely relaxed running down one trail, heading up another, and rediscovering routes in and out of the reserve.

Although the run on Sunday was enjoyable, it did begin with a jolt through my arch at the beginning, which did prompt me to stretch before continuing. It was a timely reminder that I’m not out of the woods and that this is likely going to be something I’ll need to give plenty of attention to prevent another flare up. So long as I am as diligent as I’ve been towards any injuries or discomfort in the past, I’m reasonably confident that I can manage and contain the problem, if not eradicate it completely.

The week off definitely felt necessary and I’m not at any sort of loss about it – and that I got a horrible cold at the same time ensured I could maximise my rest and recovery time. Given I was still in the four week post-marathon cycle, it seems right that my body reacted this way and basically told me to back off a bit. I can now look forward to Ilkley and the remainder of my training for Munich refreshed, recovered and fighting fit. 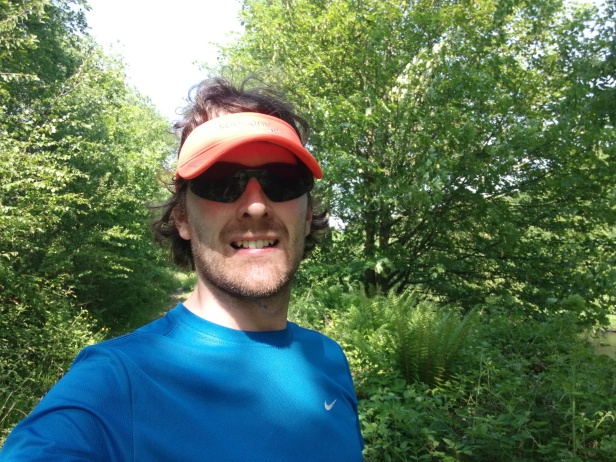