Thursday June 1st, 2017
The Hebden Bridge Fell Race is the second of three fell races I’d earmarked for the year – four including Kilnsey, but that’s not happening now. Following my reasonable efforts in the Dick Hudson Fell Race on Ilkley Moor, I made it my intention to enter this race not just for the challenge, nor the experience, but to get back up that hill to visit the great black obelisk, Stoodley Pike, a site I visited on a walk in the summer of 2016 that really livened my spirit for journeying away from man and beast, if just for a few hours. Organised by the Todmorden Harriers, this race has attracted runners regionally and nationally since 2006, held on the first Thursday of each June and was now in its 11th consecutive year.

Unlike Ilkley, I didn’t get chance to recce the course – general life got in the way, and I found myself unable to commit to a morning or afternoon to navigate the course. Nonetheless, I had previously experienced the hills above the town on my adventures last year, so I had some background knowledge and was able to use my OS Map to study the course. I signed up a few days before the race without hesitation and for the first time was able to mark myself as a Halifax Harrier – although as a FRA (Fell Runners Association) race and not a UK Athletics race, the discount didn’t apply. £5 (or £6) is cheap as chips to enter a race, an attractive price for anyone from experienced runners to those new to the fells. 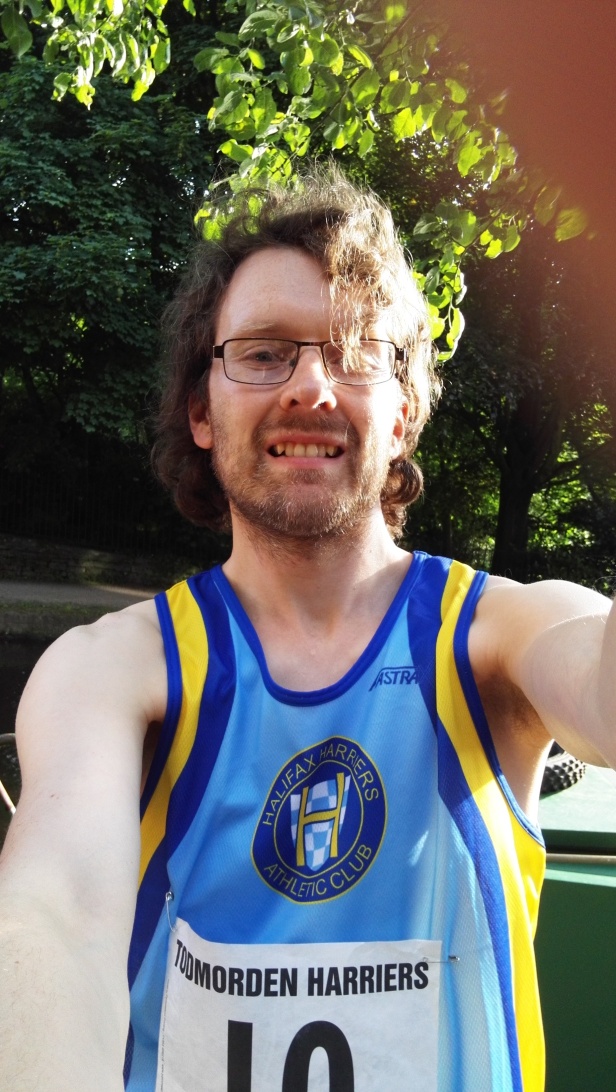 It was a gloriously sunny evening in Hebden Bridge, as evidenced by the blazing sunshine beaming down on Calder Holmes Park. I took the time to take in the sunshine, the River Calder, and head for a quick warm up jog out and back, clocking no more than half a mile. By 7:20pm, we were gathering the other side of the Station Road bridge, facing down where the start line was positioned.

I did feel a sense of pride wearing my vest this particular evening – my first race not as an enthusiastic unattached runner, or as a charity runner – I was now part of a group. Although I’m fairly sure I only noticed one other Halifax vest, with many runners drawn from Todmorden (of course), the stripey Calder Valley Fell Runners, and there even seemed to be more Manchester Frontrunners in attendance. Nonetheless, I was on the start line, that’s what mattered.

Off we went. Immediately, something didn’t feel right. It seemed like nerves. Possibly because of the knee, but I got caught out by the pace of the start, and was overtaken on the inside by a good few runners. We then began the climb up through the woodland, which often bottlenecked and allowed for plenty of pauses to power walk and conserve energy. Once escaping the woodland, I seem to recall a narrow path which soon became a mix of flat and hilly sections, my speed at which quickened or slowed accordingly as I tried to traverse the terrain. My shoes weren’t helping – more than once I had to step to the side to tighten them as they didn’t seem to be supporting my heels so well – thankfully rectified by the halfway point – and so I struggled to maintain any real momentum, although I was gaining ground as the race ascended another level.

Before long, I was really starting to have problems climbing the terrain. I’m in tune with power walking and perfectly happy to use this method on a particularly steep hill, but as Stoodley Pike loomed ahead as to my right, I had very little power in my quads, and the result was an exhausted trudge to make the final metres to the top. Even on the final approach to Stoodley, I was struggling to maintain any momentum over what was really a perfectly surmountable hill. I mustered the strength to get to the top, touch the Pike itself and then head back, mercifully, down the hill again. At least now I could try and gather some momentum.

For the next mile or so, I seemed to go alright, occasionally interchanging places with other runners and making a fist of being competitive in the midfield. Towards the end though, my lack of experience started to show on the steeper sections, as foot placement on protruding roots became tricker, the inclines a little steeper, and I would have to cede one or two more places as the race returned through the woodland back to Calder Holmes Park.

To compound matters, there were one or two more roads which contained hills. Even after spending a long time coming down, I continued to struggle to ascend normally routine hills. It was similar to the Dovestone Edge run I did about 9 months ago – on that occasion I got to 13 miles before my quads gave up! Needless to say I felt pretty shattered, physically and psychologically by it all. Finally returning to the canal, I mustered one last hard effort to ensure I didn’t lose any more places. I crossed the line and promptly felt an overwhelming sense, not of accomplishment, but disappointment. A serious case of ‘that was fucking crap‘ overcame me, as I sat myself down on the deck. Not the race itself, but pretty much everything about how it went.

(I don’t often use curse words on my blog but that’s how I honestly assessed my performance. I wasn’t holding back!)

I took myself back to Machpelah, where I cleaned the mud off my legs (a bit), got changed into my Snowdonia Marathon t-shirt and opted to indulge in some fruit juice and ginger cake. I could have had a beer for £3, but what was there to celebrate really? I didn’t feel much like drinking alcohol, and even the slight surprise of finishing 35th (in a time of 54:53) did little to raise my spirits towards the race. I gladly made the short trip back to the train station before heading home.

Had I written this in this immediate aftermath of the race, I could have come across far more negative than what I am about to say now. But I’ve had plenty time to reflect. I didn’t have a cracking night’s sleep beforehand, though I felt fine prior to the race. I don’t think the weather was a factor either – I felt warm but not hot, and at no point did I feel dehydrated. Maybe I paid the price a little bit for a recent lack of hill training – I spent a lot of time preparing for a fairly flat ultra marathon earlier in the year, and have only recently given hillier running again its full due. But ultimately, its my lack of experience in these races. I wasn’t expecting the earth in terms of a performance, but I at least always felt I could at least excel myself in these types of races. Instead, it seemed I had finally found something that’s not quite my forte – and indeed, finding my body had reached a limit that basically said ‘no’, and tried to hold me back again and again. And initially I found that to assess my performance as such. I realise I’m being overly harsh. I can more appropriately say it was a chastening experience, one which I hadn’t possibly foreseen but one which maybe I should. Brighouse has nothing you could class as a fell – a few hilly trails, but nothing more. A trip to Stoodley, or Ilkley Moor is a day trip to me. For some more localised runners, this is their bread and butter. I could just jack it in and argue I’ll never have a chance.

But that belies my own competitive spirit. I’ve not experienced a DNF yet. Or even a DNS. Even when I’ve struggled, I’ve found a way to finish. Even when I’ve got lost, or taken a wrong turn during a race, I’ve fought tooth and nail to make up the ground. And here, I took on one of Calderdale’s toughest races, and lived to tell you I was bloody awful, and still finished.

So I may well sack the Stoodley Pike 5K next month and instead redouble my efforts to get race ready for the Regent’s Park 10km later in July. I shouldn’t be lugging myself up a great big hill just for the experience when my chief focus is elsewhere. But that doesn’t mean I should ditch fell racing. Simply make sure I get out there, get some experience, build up my core strength, do my recce if I can, and take a look at the most appropriate challenges out there. I shouldn’t ever expect myself to win one of these things. All I want is to be competitive on the day. But I realise that everyone has an off day, everyone has a bad race in them, and mine just happened to be this one. There’s no time to sit around complaining, because my next race, The Drop Summer Sizzler, is right around the corner. Or at least it was, til it got cancelled due to low sales. But more on that another time.

A big thank you to the Todmorden Harriers and everyone who volunteered, marshalled and flagged out the course.