I was running home on Monday evening, still recovering from the 18 miler that had taken a lot out of me physically. While I felt my body felt good to go, my mind wasn’t feeling all there. I had finished late and there was a sense that the pressure of fitting my runs in around my work/life balance and indeed the mental toll of that 18 mile run that led to me thinking heavily about the threshold interval I was due to do the day after. It was after 10pm, still out on the streets and I just wasn’t feeling right. I talked to myself about the interval and the potential impact. Did I really want to come off the back of this late run, wake up in the morning and throw myself down Leeds Road towards Huddersfield at high intensity? In the end, it seemed an easy decision.

Sod it. I got home after 10:40pm, having stretched roadside and done some brief shopping at the local Tesco. I saw no reason to want to put myself through the threshold after everything and I decided that I had to rest. Physically, I don’t think I had fully recovered. Mentally, I was exhausted. I needed a day off running to get away from it and let my body recover.

I didn’t sleep very well the next two nights – not even a rare bottle of ale alleviated whatever was on my mind and the Wednesday (a designated rest day) wasn’t exactly a great day at work either. By now I felt I had to get back to training. My body was certainly refreshed but my mind felt stressed and I was grateful that Thursday was a day off. It turned into a day of opportunity when due to my wife having a night out, it was my turn to try and get the kids off to sleep via our co-sleeping arrangement. And so it worked – not only did they sleep, but I fell asleep too, for four hours. My wife was back by then and I only got back up to put the leftovers from tea in the fridge. I went back to bed but I knew what the plan was – up at 5am, out around 6am, and back home in time for the nursery morning routine from roughly 7:30am. The results were perfect.

Up on time, fuelled on porridge and High5 Zero, out the door around 6:10am, I set off on a series of tempo intervals, starting and ending with 12 minutes at easy pace. The intervals were 10 minutes long with 3 minute recovery jogs. I ascended through Rastrick, into Elland town centre, and back along the Calder-Hebble Navigation. I truly enjoyed it – the mornings are now getting earlier and the River Calder looked resplendent. The swans I had seen on the Navigation on Sunday were still there, a heron soaring overhead, and the 8.3 miles I clocked in 63 minutes were perhaps the most enjoyable I’ve had for a while. That’s not to say I’ve not been enjoying my marathon training, but it seemed Sunday asked questions of me and I had to find an answer for them. Now I felt truly refreshed and I spent a great day in enjoyable company which left me feeling ready and prepared for the weekend’s rigours – 40 minutes on Saturday, and the big 20 mile run home on Sunday.

Those 40 minutes were meant to be a commute, but as it turned out my wife asked me home because one of the kids, yet again, wasn’t feeling too well. This time a rash of some kind. In any event, I stocked up on chicken and decided to get the bus, which I ended up waiting half an hour for because of cancellations. I might as well have run. However, as circumstances prevailed, it was awesome. Because one of my running friends from the online group Running the World was in town. My kids were asleep, time was free. I walked out to the Ritz for 8:15pm and right on time, there was Joni! 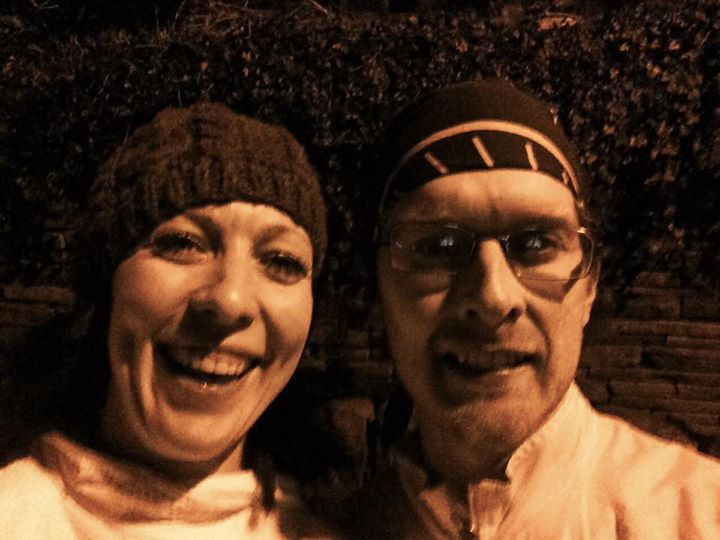 That’s right. For 16 minutes, we ran together, along the Ludenscheid Link, through Lane Head, across Slead Syke and back up towards Hove Edge. We ran at a reasonably easy pace, albeit up a couple of steep hills, and we talked about running, high school and noticed how low the moon was. We managed a couple of miles in that time before getting a dual selfie for our friends over on RTW. I went on a celestial voyage after that, admiring the stars above Wood Bottom Lane, before heading to the Calder Hebble Navigation where the low moon was present. I followed the towpath all the way into Brighouse town centre and at the bridge over the boatyard there, the moon shone, unobscured, almost full, in the night sky. Shame my phone wasn’t up to the job of capturing its splendor.

But the best thing from this run was undoubtedly that after all this time, I discovered what it was like to run with someone. Up until now, 100% of my training was alone (bar the one time myself and a cyclist silently encouraged one another up a hill through overtaking each other). To be able to talk to someone who understands running, how it makes you feel, why you do it, is a conversation I only ever pondered to myself until Saturday. Joni and I had a nice hilly run and a chat along the way, and it made the run fun as opposed to just another training session to me. Cheers Joni!

I was feeling pumped now for my big run home. 20 miles, of which I was to run starting from my place of work. At least, that was until I got a favour from a good friend of mine. And so picked up by her family, with a good catch up and a guided tour along the way, I was ferried out of Huddersfield, and up to…

Over the border into Derbyshire, I was dropped off over the brow of the hill. I got out of the car and said my thank yous and see you laters. They drove away and quickly my Garmin found a signal. I looked around, snapping the scenery for a few minutes. 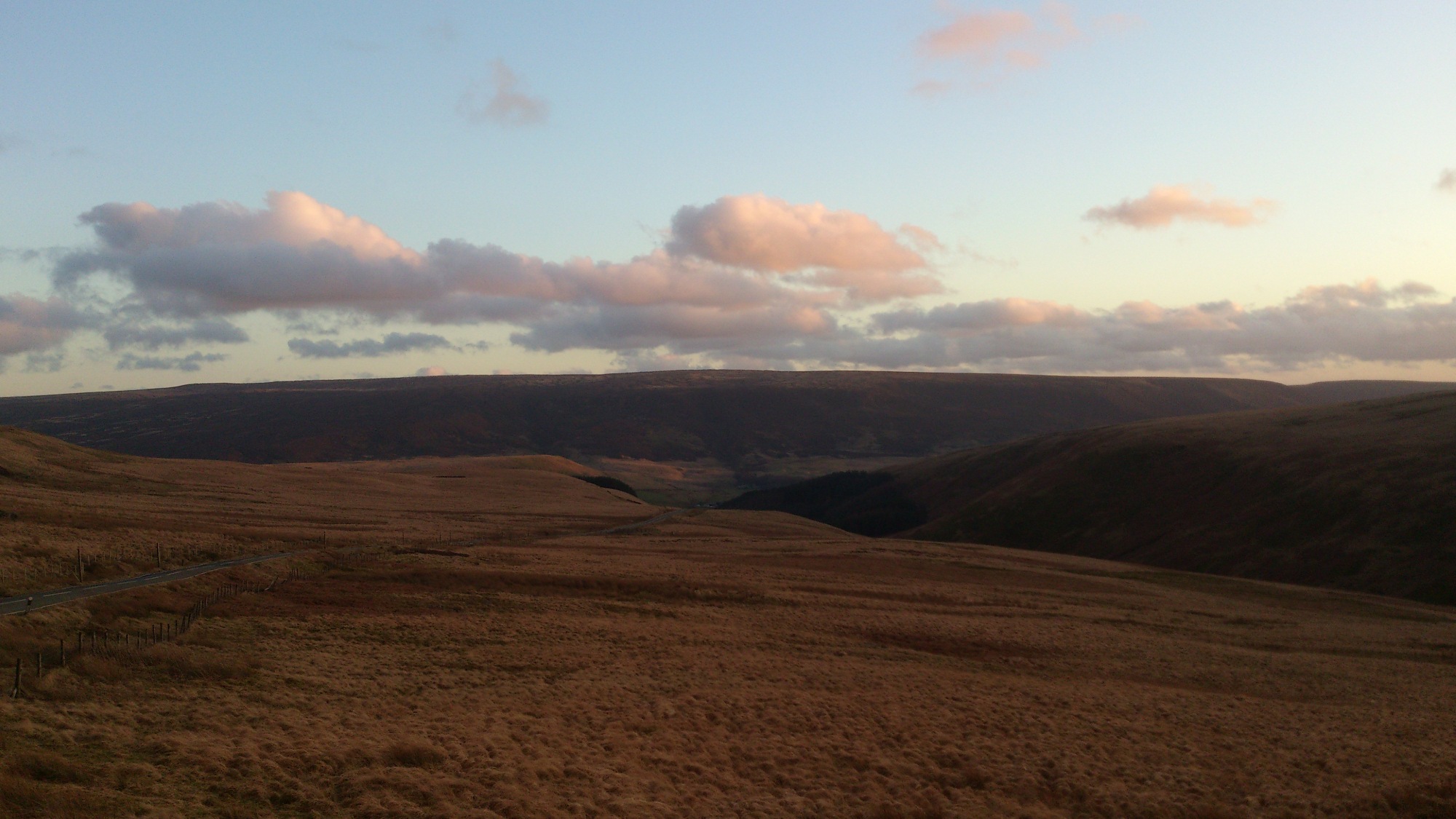 The time was 5:45pm. I was already a bit later than anticipated. Oh well. Let’s do this.

Everything was stop-start to begin with, I was being rather snap happy. You won’t be doing this in Manchester, I thought. It would also be a while before I’d be back up here. So why not take a minute to enjoy the views? The only thing I didn’t get a picture of was the chalk on the ground from last year’s Tour de France. It’s still there!

A steep uphill for the first mile only meant the next couple of miles were going to be quick and though it didn’t feel like it, I clocked a 5:58 on mile 2. It felt amazing coming down the hill, and then to run past Digley Reservoir as light began to fade. Then, a mishap. I took a wrong turn in Holmbridge and I was doubling back up Dobb Top Lane. I quickly realised I hadn’t seen the place in question on Google Streetview and managed to get back on track. Then later I paused to take another photo, and forgot to set it going again. Damn damn damn. Now my watch wasn’t going to record a full 20 miles! Oh well. Other than those mishaps, I got through 8 miles in the first hour and all was good. I saw my friend again as I passed her house and she pointed me onward towards Brockholes. I turned right off New Mill Road and began moving up the hill. A 13% gradient. Which I was to undertake. In pitch black darkness. Thankfully, no traffic, but I had very limited vision going forward and all I knew was how steep and long this hill was. It occasionally plateaued but the sheer hill endured. Mile 9 went for 10:07 – a new record – my slowest ever mile! But I ran it, that’s the main thing.

Eventually the hill levelled and I moved into Farnley Tyas as I began to manoeuvre towards Castle Hill. Mile 10 went for 9:08 and the testing nature of this run was beginning to tell. The road towards Castle Hill was arduous, relying on passing cars for light to see the footpath, at times blinded by the beams. I was glad to get by in the end and I dropped down into Aspley to begin the familiar last 6 miles along Leeds Road and home. I was lucky to avoid cramp at one point and now I was working hard. My pace consistently hovered around 8:10 per mile and I seemed to be going OK, but shorn of my usual steady pace. Last three miles were to be faster. Up to 17 (on the watch). I gritted my teeth. I ran as hard as I could. Mile 18 – an 8:07. ‘What have I got to do?!’ I really wanted something in the mid-7’s. I kicked harder. I tried to keep going. The watch beeped. 7:36 for mile 19. ‘Yes!’ My word, that was a hard effort just to get that speed up.

I reached the Ritz and stopped. 19.63 miles says the watch. More like 20.something. I was exhausted. But a couple of minutes later, as I wearily trudged up the hill, I realised – I had done it. I’d reached 20 miles for the first time. And though it turned into a right slog, I’d navigated my way home almost without having to refer to GPS and I had endured whatever the night could throw at me.

I felt twice as sore as last week, a sure sign of what is to come in under six weeks time. But this time, I was happy. I was content. I was positive. And for all the arduous I’d experienced in the last week, thanks to a bit of a rest, a refocus, and with a bit of help from friends, my mojo was back, and at last I could look forward again to April 19. 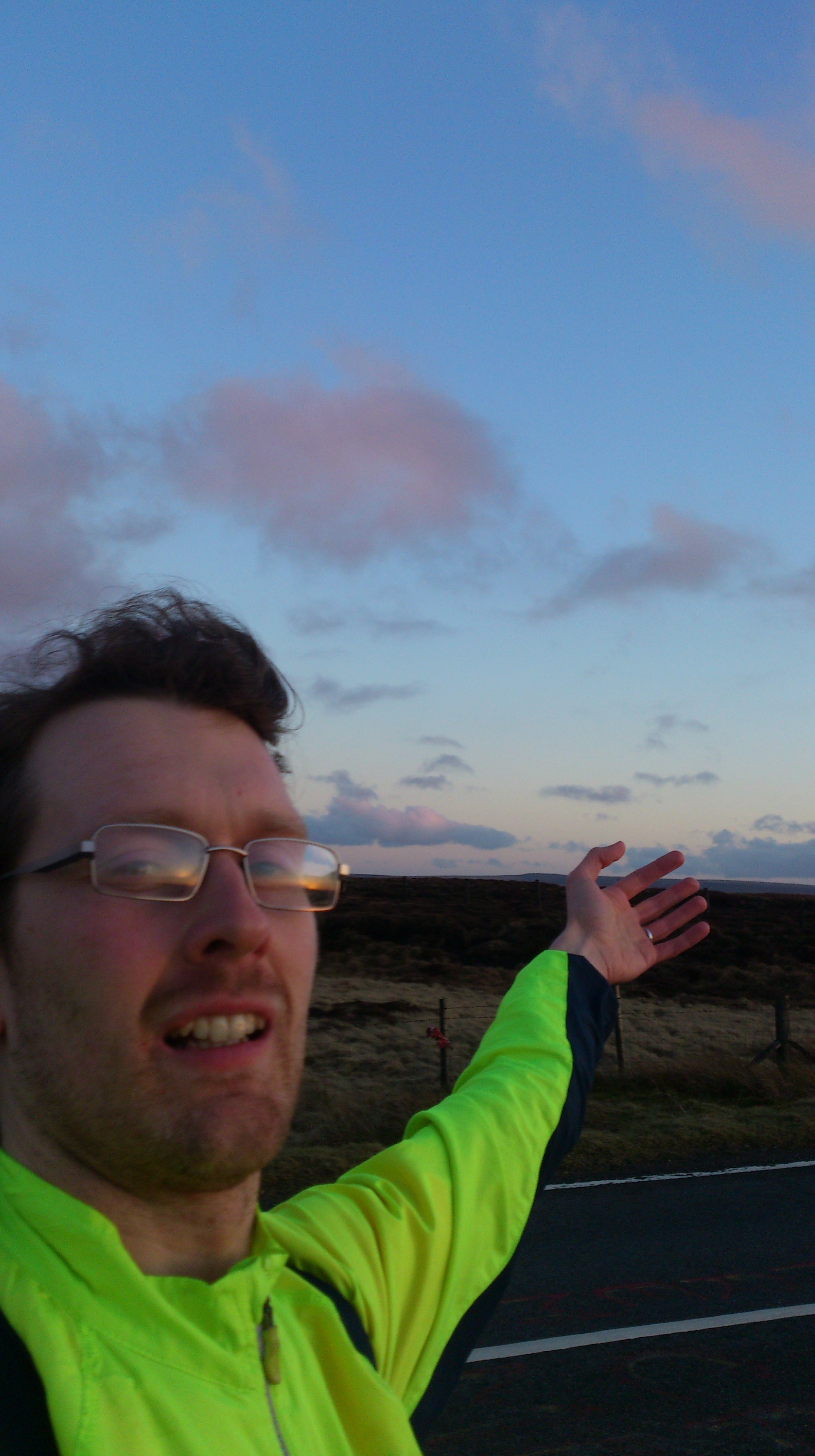