First of all, I’d like to wish everyone reading this page a Happy New Year. Hope you all had a cracking Christmas and overall a fantastic 2014.

My 2014 in my Resolutions series is now at an end, and that means it’s time to look back over my progress against my goals of getting more sleep, learning to swim again, running more and running faster. I’ll still be looking back across how December went, but it was a largely uneventful month in this regard and so I won’t go over it too much. Without further ado, let’s read on.

The first chart shows how I went in December, which shows it largely went in fits and starts. I had a fair bit of time off work this month and with a layoff from running induced by a close shave with laryngitis, I did get some excellent nights of sleep. Conversely there’s been some stinkers too, and as the year came back to an end I found myself struggling to get to sleep for early shift starts.

The next chart, shown above, is a fairly crammed year long chart at my sleep progress. The dotted line – for the minimum six hours I set – is just about visible. In the end I finished with a sleep debt of 3.5 hours. That came down a few hours from November, but that still marks a slight failure in my book. Given I was about 30 hours down early in the year, I’m pleased I managed to grind the debt away but I should have been in surplus by now. If anything, the last year has at least reinforced the value of getting enough sleep, and with marathon training now underway, getting enough, and indeed the right amount and quality of sleep is of utmost importance.

I didn’t get in the pool once in December, with either work chopping into available gym time and a choice above swimming of work on core and cardio aspects inside the gym. This doesn’t mean I’ve dropped swimming, and I wouldn’t say this year was exactly a failure in this regard because I did the one thing I once swore I would never do again – that was to get into a pool on my own and find my flippers. I overcame that obstacle and found I have somewhat rudimentary technique in that I can swim one speed confidently – fast, in freestyled 25 metre lengths. The fact is, I’m a long way off being a swimmer per se. It’s going to take a lot more than just getting in the pool again to get the hang of this, but I’m having real trouble with my work and family commitments to get to my local gym’s adult beginner/improver classes.

Triathlon is still a goal of mine, but for now it remains very much a long term goal with no fixed date. I still don’t own a bike and I really need to get up to speed in both water and in the saddle before that dream ever becomes a reality.

Nothing much happened in December – records didn’t fall and mileage was low. However I did sort out my registration for the Liversedge Half Marathon in 2015 which sorts out my pre-marathon half marathon. And my marathon training is finally underway. It started quite lairy – icy conditions put paid to my first run, which should have been at least 30 minutes but was cut by half as I nearly fell having already seen my average pace drop by over a minute. I had such a phenomenal race in the 2014 edition and of course, the sub-1:25:00 half marathon remains in striking distance. However I’ve yet to consider how I will approach that race and it may well be that I treat it like a marathon in terms of strategy and hydration/fuelling techniques. I don’t really need a lot at half marathon level in terms of gels and the like – anywhere between 0 and 1 per race – but the marathon is a bigger target, and so the sub-1:25:00 hasn’t really crossed my mind too much for this race.

My marathon training finally got underway as the year ended. It started quite lairy – icy conditions put paid to my first run, which should have been at least 30 minutes but was cut by half as I nearly fell having already seen my average pace drop by over a minute. But the ice thickened enough to mean my next run, an interval session, was possible and it went brilliantly. Marathon training is definitely on now! And I got a super image of the sunrise against the ice hills in Hightown, near Liversedge, to capture the season perfectly. 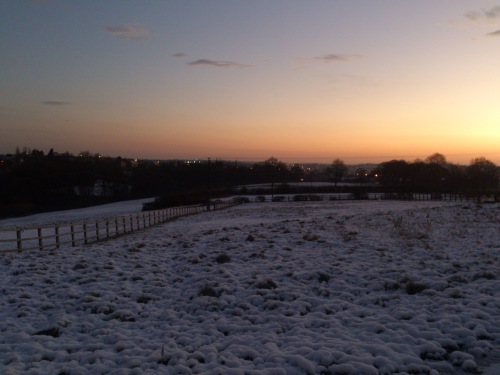 I certainly ran more, clocking more miles than in any year so far, and entering seven races overall. I lost track of exactly how much mileage I accumulated as I switched from Nike+ to MapMyRun to Garmin in the space of a year, and haven’t been able to accurately measure my end mileage for the year. I expect its around the 800-900 mark – I spent much of June injured and the last two months of the year were of very low mileage in comparison. Still, I reckon I’ll crack the magic 1,000 mile figure in 2015, with stepping up the distances and all.

So you may remember, at the start of the year I aimed for a sub-1:30:00 half marathon, and a sub-40 minute 10km time. Well, it is fair to say I succeeded with flying colours here.

I set three PB’s in 2014 – the first being the huge 4:44 PB off my Great North Run time in 2013, finishing the Liversedge Half in 1:26:45. This was later to be reduced by a further 1:08 at the Great Birmingham Run, in a time of 1:25:37, which was enough for 196th out of around 20,000 people. And back in March I went sub-40 minutes for the 10km distance at the Epilepsy Action Bradford 10K, timing 37:15. I also achieved something else in Birmingham – an incredible 4:54 mile during the Great Birmingham Run at the start of the race! I never knew I had that in me but I was truly stunned by that one – my previous quickest was the 5:23 I ran in Liversedge – again during the first mile! 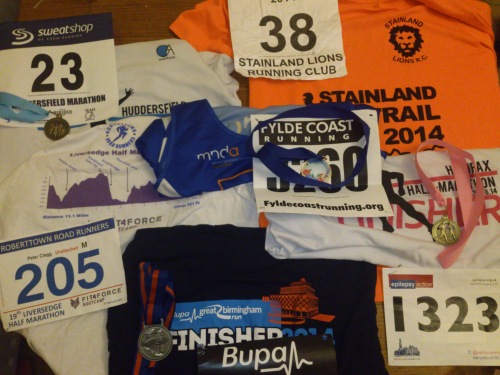 Top left of the picture is the Huddersfield Half Marathon. This race was my second best result of the year but in all respects it was a bit of a cock-up from start to finish, from the marshalling at the start to every shirt and bib number being labelled as a marathon, even for those doing the half. I finished 4th in that race which, because of how severely the lack of a marshal at the start cost me in terms of time and strategy, felt a bit of a sickener. I certainly haven’t felt as low as I did after that race, but on reflection it is a result I’m proud of.

The best result was undoubtedly the one I earned two weeks after Huddersfield – 3rd place at the Blackpool Beach 10K Run. Having had limited training on sand and a belief that a sub-45 minute run would be an achievement, the race unfolded extremely well for me, arriving at halfway in 2nd position and not far behind the leader, before the vicious headwind took hold. I couldn’t hang on to 2nd but I clung on for dear life to take 3rd. I’ve never raced so hard for a finish line. The result was beyond my wildest dreams and without question the best experience I’ve had as a runner to date. I had to find my mojo again post-Huddersfield and it only arrived the day before the Beach 10K. I wasn’t oozing with confidence but I found I had the mental drive to succeed, and this time it was entirely in my own hands. It was an amazing feeling, to do it in the MND Association vest, in my mother’s memory was something very special indeed, and the price of wine and sports socks went to very good use, I assure you!

So where does that leave my Resolutions in 2015?

Well, I won’t be running a Resolutions series this year because much of my focus right now is on the Greater Manchester Marathon. However I will be providing training updates during this time, so you’ll still get to see how I’m doing on a regular basis. And I will still uphold this year’s aims of getting more sleep and hopefully improving as a swimmer. I also aim to improve myself nutritionally, as I want to be in the best shape possible for April 19th. Sure, I’m not in bad shape at all, but I’m not the healthiest by my own admission and want to cut back on certain junk foods and get more in touch with fresher ingredients. Moderation and all that. But I am taking the marathon very seriously indeed and will not seek to leave any stone unturned.

Timing goals will not be so important, not for now at least, but I’ll still be lining up opportunities to have a crack at my existing personal best times in the future.

Thank you all for following this series over 2014, for joining me on my journey of self-improvement and personal achievement. Thanks to my friends over at Running the World, to my WordPress readers, and to my family and friends who’ve been immensely supportive and indeed in my wife’s case, incredibly understanding and accommodating of what is truly now not just a hobby, but a sort-of way of life. I’ve lost count of the number of people who have enjoyed my writing for this site and I’ll continue to try and write these pieces for you as we head into 2015.

I hope 2015 is a brilliant year for you all. Cheers for sticking with me! 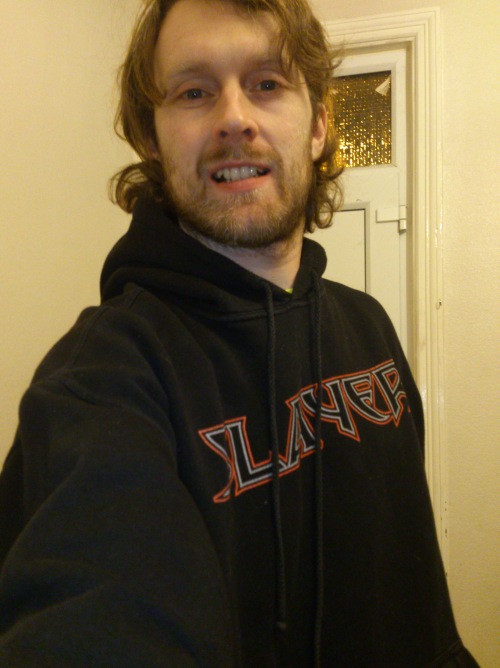