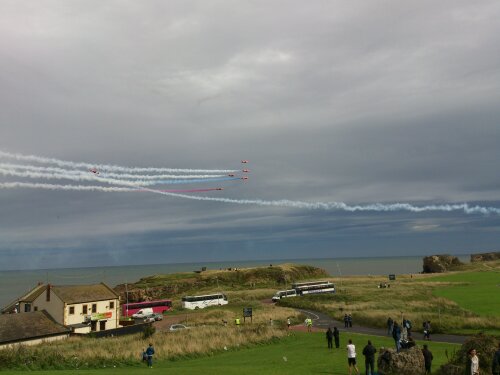 I have to say, that throughout the build-up to the 2013 Great North Run, I could never have expected what was to follow. Sure, I’d spent many a morning, occasionally an afternoon or evening, pounding the towpaths, the highways, the byways and the trails, with an increasing amount of focus, and the last few weeks were also spent watching the fundraising total first get past the £250 mark, then £300, then while in Newcastle, past £400. All knowing it was going to be doubled by my employers, as it raced towards the magic £1,000 mark overall. But all I could do was remain focused on this race. I should have known to expect some sort of congratulations – but perhaps not on this scale. I wasn’t expecting it.

Having finally got some power back into my phone after it died upon boarding the train home, I’d went onto Great Run and discovered my finishing position in the race – 1198th. I was slipping into a mixed state of huge pride, satisfaction and disbelief at my achievement. I’d only aimed for perhaps the top 5,000. I’d have been happy with that. I managed to get onto Facebook later that evening and post details of my race result in depth, both on my personal page and on the Running the World with whom I’d become so affiliated in the last few months. I’d become accustomed to receiving notifications up to about 8 or 9 on a regular basis, but it wasn’t until the morning after I noticed just how things were going to explode.

My brother mercifully swapped shifts with me to ensure I started at 11:30am and not 8:00am the following morning. I arrived into work and got to my desk. My colleague across from me walked around to my desk and shook my hand, and said he’d have given me the sweepstake money back if he’d won. Another lady in my team came over and said pretty much the same thing. As the day unfolded, people were congratulating me, one or two hugged me. I spent a good portion of my meeting with my team leader discussing the weekend. People were now suggesting I could do under 1:30:00. One stated if I’d clocked that time I’d have been eligible for the London Marathon as an elite entrant. Really? As an elite?! I’ve no idea if that is actually correct – I’d only run half the distance – but still, to be told you’re a shade off elite pace – and in your first year of running again – is just, well, crazy.

Upon leaving work, I checked my Facebook page. 20 notifications. Cripes. All manner of people liking my post on my main wall. My post on the Running The World group wall. People liking comments, people responding to comments. Donations were still coming in. I got home and I was telling my wife how apparently close I was to qualifying for London. In the evening Facebook still hadn’t settled down, as the likes and congratulations continued to increase.

The plaudits kept coming in the following day and it wasn’t long before I decided I would have to do something more. I asked to write an entry to the company intranet blog which was basically a very condensed version of my previous post. I feverishly got to work at it. People were asking who had won the sweepstake at work. I had the answer but I wasn’t prepared to reveal it under everyone had paid up. I got talking to more staff about it and there was more talk of going under 1:30. My mind by now was full of belief at aiming for this mark in future. Once I’d recovered, of course. My muscles ached for two days after GNR. I’ve never felt intense aching like it. I must’ve put in a shift up there. I spent the next two days walking around like a dinosaur, eventually concluding I needed to get back out on the road. The Wednesday proved to be the day I did just that – it was a tiddler, only 1.8 miles. But wow, I felt so much better for having stretched, run, and then stretching again.

The MND Association were still contacting me, congratulating me on my success and sending me an amateur photo of me chatting to one of the volunteers. I then began checking through my official photos from Marathon Photos which were decent, though whether I’ll ever shell out for them is another thing. I look forward to seeing the official photos coming out. Things were about to get a little crazier when I headed into the local running shop for the latest copy of the Northern Running Guide. I told the sales assistant my finishing time which he described as good. He asked if I was part of a club (I’m not) and if I’d ever considered joining one. I explained my kids bedtime situation was holding me back on that front and that I currently enjoyed running solo, and the freedom it brings, a lot more. But I added I’d never say never. He seriously got me tempted, naming a few clubs in the area and what they do, and at one point mentioned if I applied myself correctly, perhaps intensified my training and worked hard enough, I could knock ten minutes off that time.

Did I leave the shop on a high? You bet I did. To be told you can potentially not just go under 1:30:00, but maybe even close to 1:20:00, is bananas. I seriously never expected to be considered fast but I now realise my potential. The question is whether I can apply myself enough and stay relatively injury free in my few remaining prime years. At 29, it’s now or never really – I lost out on 10 years of running due to university, music and beer. I’ll never compete at the Olympics but I want to be capable of running fast now for a few years yet. I really want to work at improving my core strength, looking after my knees, trying out different things – I’ve often spoke of moving into triathlon (if I learn to swim again), or duathlon (if I don’t).

The MND Association then sent me a certificate in the post on Friday to commemorate my achievement. It really felt as though every time I expected things to die down, something else would come along just to get me excitable once again. I haven’t known anything like this before – a considerable number of people with a vested interest in my challenge and celebrating my achievement. I finally got to show the medal and discuss my race with my father and associated family a week after the race. And over that weekend, it finally happened – I got a call from my grandparents saying they’d received a cheque from an auntie of mine I haven’t seen for a while. She’d left £50. And that was it. The £500 target for my fundraising – which at one point seemed a long way away – had been passed. Incredible! With charity matching from my employers, that is set to take the final total past £1,000, an astonishing amount that I’d never dreamed of raising for the MND Association. The fund is still open now, and I’m due to get the offline donations sent across soon. And though donations now no longer count for double, they still go a long way – my father made true on his pre-race pledge and actually donated £100 to the fund. Up to now, the JustGiving page stands on £639.50 – something I honestly can’t believe I’m saying, even now!

After all that, from staggering achievement to staggering news to staggering achievement, it feels like things have, at last, returned to normal, and all that’s left is to keep up with the fundraising until everyone who’s committed to chipping in have done so. Where do I go from here then? Well, I’m back out training, and I’ve put myself in for the 2014 Liversedge Half Marathon, which is on Sunday February 9th, featuring a section that runs along part of my hometown, which is a chance for my family and friends to gather and cheer me on around halfway along the route. I have my eyes on a number of races beyond then and haven’t decided which I’d prefer. There’s the Blackpool Beach 10K, which I have my sights on as something different and a good chance to get some training in on different terrain. Then there’s either GNR 2014 or the Cardiff Half Marathon, or maybe elsewhere. There may be many more yet. The key for the next year is to get as much race experience as I can, and as much as my wallet can take. Before then, I’m undertaking a work colleague’s challenge to run up to the Castle Hill monument in Huddersfield, a long run to work at a measured 12.1 miles from home to monument to office. I’ve then decided I’ll take a month off to allow for my body to rest, so I can focus on strengthening, getting my new running shoes and breaking them in, before devising a training plan for Liversedge starting mid-November.

All in all, I’m excited for what lies ahead. But I know already that I already ran the biggest race of my life, and even when I step up to marathon distance, I feel that because of everything it represented, nothing will top Great North Run 2013, for what it represented, for what went into it, for what I achieved and everything positive that came from it.